On my Authors Den page, I have posted chapters 1-4 for my novel Goliath, along with chapters 1-2 for both The Devil's Path and The Last Eagle.

An Interview with Richard Turner by Peggy Kopman-Owens

An Interview with Richard Turner
An interview with RICHARD TURNER,
Canadian author of historic action/adventure series, including:
THE LAST EAGLE and THE DEVIL’S PATH

Thank you, Richard, for taking time away from writing the newest episode in your action/adventure series.

“Thank you, I truly appreciate the opportunity to discuss with you my novels.”

First, your fans will want to know what you are currently writing. Can you give us a sneak peak at your working title or a snippet from your newest storyline?

“I am in the process of re-editing two novels, both of which are sequels to my already published books

SCORPION is the second novel in the Alexander Scott series and is set in French occupied Mexico in 1865. Scott is assigned a mission to discover why ancient artifacts are being systematically plundered and who or what is behind it all.

A FRAGMENT OF DESTINY is the second novel of the Christopher Sheppard series and takes place in 1928. This time Sheppard finds himself drawn into protecting an heiress who is obsessed with finding out about the truth about her older brother’s death in WWI. Suffice to say it is far more complicated and dangerous than it sounds.”

Certainly, with your diverse background, you could have chosen to write real life action/adventure stories. Why did you choose to write fiction based upon historic events, rather than non-fiction?

“To be honest I shy away from writing non-fiction for several reasons, the chief being that I do not believe that I am ready to write about my time in the military and will wait until Afghanistan has faded from the public eye before I re-visit my experiences there. As for writing about historical events, I find that very easy to do, as I love history and have amassed a small library over the years reading and researching various events and conflicts from the age of antiquity until today.”

Before you first put pen to paper for THE LAST EAGLE, the first in The Christopher Sheppard Adventure Series, did you have your entire story in mind, or did the story evolve as you wrote?

“For me, I think of story and then dissect it into workable chunks. From there I fill out the chunks with research. It would be pointless to write a historical adventure novel and get all of the details about the period wrong. I try as best as I can to stick to my story outline, but find quite often that I adjust a detail or an idea as I progress in order to make the story flow better.”

Was this also true for THE DEVIL'S PATH, your first book in The Alexander Scott Series?

“The process is the same for both novels as I found that it helps focus the mind and the writing process.”

Did you start either of these books, planning a series?

“My first book was THE LAST EAGLE. I actually started writing in back in ‘06, but found that I was never truly happy with the end result; consequently it went through many revisions until I was happy with the end result. From there I wrote a novel entitled GOLIATH, a modern day adventure/thriller, which at the moment is only available on Amazon. Looking to delve into another era, that is when I embarked on THE DEVIL'S PATH, set at the end of the US Civil War. I honestly had not intended to have them become a series; however, I found that I like the characters and wanted to have them involved in further adventures.”

Since your work reflects a dedication to historic research, if you could go back in time to one particular place on one particular day – where and when would that be, and why?

“That is a good question and one that is near impossible to answer. However, if I had to pick a day it would be June 18, 1815. I am a Napoleonic buff and would like to have had the opportunity to witness the Battle of Waterloo, the final struggle of that epoch.”

Can you describe a particular moment in your life, when you first realized that you had both the need and the ability to create a story from a blank piece of paper?

“It was during a tour in the Middle East when I found myself stuck on the border with the Gaza Strip for about six weeks. I had often thought about writing and with absolutely nothing to do at night, I began to write what would ultimately become THE LAST EAGLE."

What advice was most helpful to you, when you first starting writing with serious intent?

“Keep on writing. Do not let the rejection emails/letters bother you, one day, if you are committed to your work, you will succeed.”

What advice would you like to share with someone, who has just begun the process of writing a first novel?

“Take your time and do your research. Having a good understanding of what you are writing about is essential to the craft. There is nothing worse than reading a novel only to discover that the author does not have a good grasp of what he/she has written about.”

Thank you, Richard, for sharing your thoughts, your words of wisdom, and your time. I join your fans in looking forward to the release of the latest in your series.

Taking into account the comments written on the Amazon site regarding my novel Goliath, I have had my work re-edited and have uploaded the latest version on Amazon. I hope those people who have/will download Goliath will enjoy reading the first of what I hope will be a long running series of modern day thrillers. 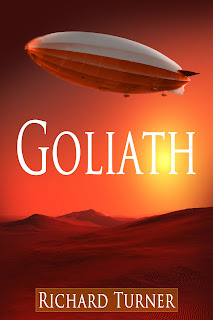 I must admit that to date I have not been very unimpressed with the level of work that I have received from people I have hired to edit my work. As an ebook writer I believe it is very important to present the best possible product you can when you try to sell your books. However, I have used three different editors so far and absolutely none of them have been up to standard. I find that I have to go through their "corrections" and re-work their work until I am pleased. I know that you get what you pay for, but I have invested substantial sums of money with my editors and have found them all hopelessly lacking. I hope on my next go around that I can find the right balance between cost and the delivery of a decent edit.

Thoughts?
Posted by Richard at 15:51 No comments:

The Last Eagle is now being promoted on Goodkindles' website.

http://www.goodkindles.net/2013/08/the-last-eagle-kindle-ebook-by-richard.html
Posted by Richard at 12:19 No comments:

The Devil's Path - where to find this historical thriller

The Last Eagle - where to find this historical thriller 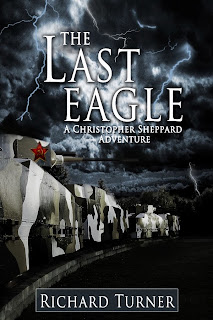 NEW SITES WITH LINKS TO MY NOVELS

Recently, I came across a couple of excellent sites that have been gracious enough to post my work. e-Reader Recon and BZ Hercules provide a unique service for new writers, such as myself and are a superb place to showcase your novels from. I heartily recommend that you give them a look.

http://www.bzhercules.com/hercules_press_releases.html
Posted by Richard at 07:47 No comments: